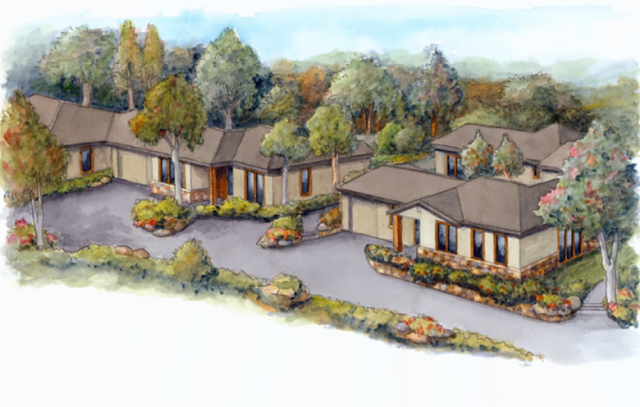 ‘Riverside’ was officially opened on November 13th 2019 by long term Warrandyte identity and former mayor of Doncaster, Val Polley OAM. Val has been a long term campaigner for suitable retirement housing in Warrandyte. Many older residents have moved away from their community after losing their struggle with typical Warrandyte bush blocks.

The opening became a celebration of what can be achieved by sustained community action. Some of us were surprised to hear it went back as far as 1978! Sybille Ims delivered a heartfelt presentation on behalf of the Lischke family, the original owners of the site. In a tribute to community care and consideration in Warrandyte, it is worth recording that the family wanted it developed as retirement housing, as did the original owner of the Creekside site. (Read both Val and Sybille’s presentations in pdf below). Val formally opened the site with Manningham Mayor, Paul McLeish, and her contribution is recorded on a plaque in the rotunda.

Val said “I am delighted to have been involved in the effort to provide retirement housing for Warrandyte residents. It has taken many years to get to this point and it is wonderful what can be achieved with community support. It is a shining example of how to provide such facilities without the input of Council, Government or Business. May there be more in the future!”

New resident Jock Macneish heartily agreed. “It is a privilege to be living next door to friends we have known for decades and who share our love of the Warrandyte environment and community.”

Riverside is a total community effort, designed by local architect Adie Courtney, and built by Nathan Croft of Craft Built Homes, and project managed by local developer Andrew Yen, supported by many in the Warrandyte community.

The Cooperative began as a sub-committee of the Warrandyte Community Association, many members of which remain closely involved with the project. There are now a total of ten units in the combined Creekside and Riverside developments which will continue to be managed by the Community Cooperative.

For all its friendliness, beauty and charm, if you’re one of the older residents, Warrandyte can be a somewhat difficult place in which to live. For years Warrandyte has lost these residents to retirement homes in Lilydale or Donvale or the Peninsula. Often it has been for lack of an alternative – an opportunity to stay in Warrandyte, something a little smaller and easier to manage, something closer to the bus or the supermarket.

Back in 2007 a concerned group of locals raised funds to purchase land and build a not-for-profit community retirement village in Harris Gully Road. ‘Creekside’, established in 2011, has just five villas built to a very high standard and was designed specifically to suit the needs of older locals. The concept, design and construction won the retirement village two statewide awards and much praise from the Warrandyte community. The ‘Creekside’ residents continue to be a vital part of our township.

Following this success the Warrandyte Community Retirement Housing Co-operative Board is delighted to announce it has negotiated the purchase of properties in West End Road and First Street for a second low key retirement village ‘We are absolutely delighted’ said Andrew Yen, Board Chairperson. ‘We receive many enquiries about a further development and the new site is ideal for the purpose and the proposed retirement village has already received a warm reception from neighbours’.

Purchase of the land has now been completed and basic designs have been finalised by local architect Adie Courtney, who designed the acclaimed ‘Creekside’ villas, once more involved. In March 2017 formal planning applications were made to Manningham City Council.

The new retirement village is to be called ‘RiverSide’, the historical name for the river flats subdivision within which the village will be built. A planned regular series of newsletters outlining the status of this new WCRHC development will be featured on this webpage, with the first edition found below:

‘There is also an opportunity now for local residents to join the Board and make a difference and contribute to the health of our Warrandyte community ‘added Andrew. Locals can express their interest by writing to WCRHC, PO Box 352, Warrandyte 3113 emailing wcrhc.warrandyte@gmail.com or calling Andrew on 0403924899.